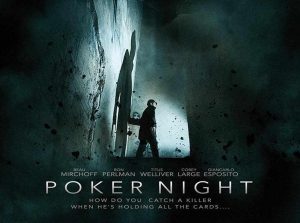 The highest achievement of any film in the horror genre is finding a convincing premise. It definitely has to be scary, but it can only provide the jumps and scares needed if its premise works for the audience. So, the race is almost constantly on to find the next big scary thing. From the proliferation of sequels and franchises, remakes and reboots, will occasionally come an original movie that really works. Often this comes from mixing genre influences, like 2014’s It Follows, which was a great mix of 80’s horror and traditional slow-moving zombie territory. Poker Night mixes extensive flashback, reminiscent of Christopher Nolan’s Memento (2000), aspects of the gorier end of the Saw series and the psychological thriller, to interesting effect. Director Greg Francis is a TV veteran, and much better known for television work. This was his first foray into theatrical movies, and an interesting debut. 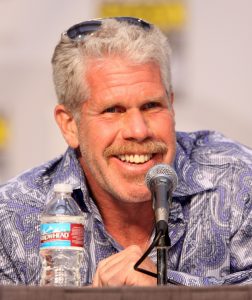 Serious Actors and an Unusual Premise
Poker Night was released in theatres and onto on-demand in December 2014. It was made by Wingman Productions, an up and coming thriller and horror production company which has given us Cabin Fever 2: Spring Fever and 2005 crime drama Chasing Ghosts. Poker Night had a quiet opening in cinemas, but has since done better in domestic sales. The movie centres around young police detective Stan Jeter, played by Beau Mirchoff.

After heroism in the line of duty, Stan is invited to let off steam by playing poker with some experienced colleagues. Stan is then captured by a serial killer, along with a young woman. These two threads are intercut with each other, as Stan remembers the murderer tales his colleagues told him during the game, and tries to use their wisdom to get him through his ordeal. The plot is so complex; it would be a shame to spoil it. There’s no doubt that the movie tries to keep you guessing.

The Advantages of Poker 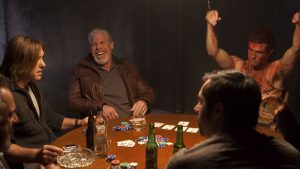 Francis’ aim does seem to be to combine a few horror sub-genres, and see what works. The movie works best in those moments borrowed from the psychological thriller and the good, old fashioned police thriller. It makes great use of poker as its central conceit, without veering into locked room/ludic premise territory unnecessarily. If poker is a game, albeit a serious one, so is the ordeal Jeter must go through. He’s learned the rules but he’s still new and now has to prove himself, just like the other cops have done in the line of duty. And in order to play efficiently, Jeter has to use not only the rules, but also use poker strategy to correctly choose when to play aggressively, when passively, and how to effectively take advantage of his opponent’s mistakes, both in poker and in the cat-and-mouse game he is forced to play against his captor. This is a convincing premise. The interaction between the protagonist is a metaphorical game of poker itself, as our hero needs to bluff his way out alive, while still reading his opponent in the same way that poker pros try to read each other at the felt tables.

Another point of the poker theme is also to lend authenticity to the movie’s police scenes. What better way to get some veteran cops into a room together, and have them tell their stories to ratchet up the tension? We get a treat as each officer tells his story, and a series of films within films unfolds. They’re all well-conceived, some scarier than others, but they make a great counterpoint to the more contemporary, gory sections with the masked killer. The world of the film is deepened by the poker scenes, and it’s a signal to the audience that the movie is aiming for gritty authenticity. 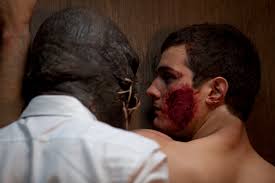 Too Many Genres Spoil the Broth
For all the poker-related depth and grit, there are some false notes. As often happens, the only main female character is underwritten, and steers perhaps too close to random female victim territory. It’s interesting to see her early in the story unsuccessfully flirting with Jeter, and then witness their encounter as they later meet under very different circumstances. However, apart from her initial escape attempt, she isn’t given much agency. For a movie that admirably tries things out in terms of tone and genre and succeeds, this was a misstep.

The critical reception of the film on release was mixed. The main issue was with the film’s structure, with reviewers feeling the director was too focused on keeping the audience guessing, failing to build the tension which is so essential to horror. This is true of the movie, and the multiple flashback sequences could be wearing at times. However, this reviewer praised the cinematography, observing how flashbacks were under- or over-exposed to give instant shape to the narrative and suggest the viewpoints of various characters. There could also be some surprises for those of you looking for a tense police thriller; just to let you know, the gore is extensive. This is the kind of problem that mixing genre throws up.

It’s very possible that this movie will gather momentum, and be seen for the original, almost homage-like film it is. The affectionate mix of classic horror sub-genres and the unusual use of poker as a central conceit will draw a fan base, no doubt. The great cast and adventurous plotting make Poker Night a good watch. You could say, at a pinch, that the torture aspect of the movie sits uneasily with the thriller and psychological themes. However, any movie that tries to find a new thrill, or an original premise for horror is worth a try.