Play the Victim with this Killing Ground Poster 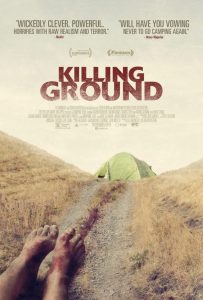 Joining the likes of Picnic at Hanging Rock, Wake in Fright, Mad Max and Wolf Creek, Damien Power’s Killing Ground lines up within a long tradition in Aussie genre cinema that uses the hostile Australian outback to create an atmosphere of unease and isolation. Ahead of the film’s July release, IFC Midnight – who picked the film up following its Sundance US premiere – has put out this stark poster that puts us in the position of the victim.

The visceral survival thriller tells the story of Ian (Ian Meadows) and Samantha (Harriet Dyer), who stumble upon an isolated campsite to find an SUV and a tent, but no sign of the occupants. As night falls and the campers fail to return, Ian and Sam grow increasingly uneasy. The discovery of a distressed child wandering in the woods kicks off a chain of events that sees the couple become the prey of vicious criminals Chook (Aaron Glenane) and German (Aaron Pedersen). 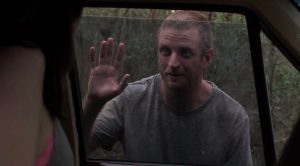 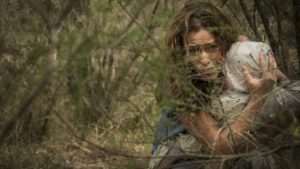 Killing Ground is the feature debut of writer/director Power, an award-winning filmmaker with a number of acclaimed genre shorts to his name. It will receive a limited theatrical run and VOD release on July 21st. In the meantime, check out the trailer, which appeared earlier this month.