Play to Survive this Trailer for Nerve 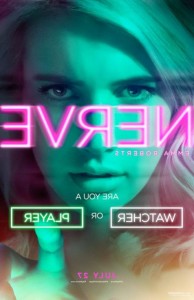 A new trailer has been released for Nerve from directors Henry Joost and Ariel Schulman who are the duo behind Paranormal Activity 3 and 4. Their next endeavour appears to be very different and boats and a stunning colour palette that would make Nicolas Winding Refn proud. It’s filled with bright blues and reds that give the film a retro feel that you would typically associate with comic book adaptations. It also looks a lot like the upcoming The Purge 3, so it seems that thrillers are leaving their typical darkness behind and opting for a more cheerful visual style.

Synopsis:
A high school senior finds herself immersed in an online game of truth or dare, where her every move starts to become manipulated by an anonymous community of “watchers”.

The concept is definitely intriguing, but we fear that far too much was revealed in the trailer. Hopefully there’s a lot more to come than what the trailer has shown, so that the finished film doesn’t feel disappointing. 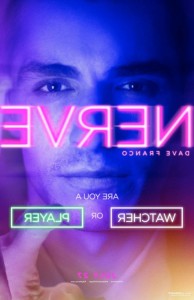 There is a lot of room for some really interesting ideas to be explored and if the film can push the limits that were seen in films like 13 Sins and Would You Rather, it could be pretty great. That’s probably asking a bit too much from a film that seems to be aimed at a younger demographic, though.