Plants Vs Zombies: Garden Warfare Comic To Be Released 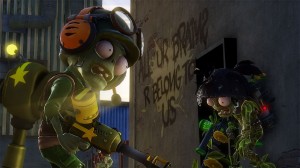 There seems to be no end in sight for the battle between plants and the undead and with this news, the war wages on. It has been overwhelmingly successful as a game, with over 100 million downloads on the app store, and its recent comic spin-off series has sold over 1 million copies. We really can’t get enough of those pesky zombies. It should be no surprise to learn that a brand new comic is on the way.  Titled Plants Vs Zombies: Garden Warfare, the story will bridge the gap between the games Plants vs. Zombies Garden Warfare and its sequel, letting us know just how exactly Dr. Zombass managed to take over suburbia.

Get ready to be sucked in to the crazy world once again, when the new comic is released on October 28th 2015. Who’s whipping up a Plants vs Zombies Halloween costume this year?