Plan Z Brings a New Vision of the Zombie Apocalypse 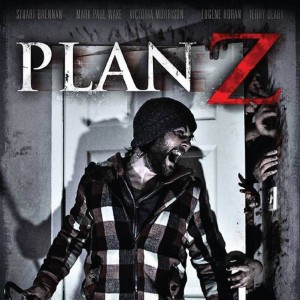 Currently causing a stir at genre festivals is Plan Z, a zombie film directed by multi-talented Westcountry lad Stuart Brennan. The prolific actor, producer, writer and director won a Welsh BAFTA for his performance in boxing drama Risen, and Plan Z, his feature directorial debut (which he also wrote, produced, and stars in) has already scooped up awards at a couple of prestigious horror fests. It’s all too easy to be cynical about each new zombie flick these days, but these excerpts from Plan Z’s press release have gotten me more than a little intrigued.

“Writer, director, producer, and BAFTA-winning actor Stuart Brennan has a plan for the zombie apocalypse, and it comes in the form of a critically successful and award winning new movie: Plan Z.

The film that was shot in Scotland, the Isle of Skye, London, Chicago, and Verona, Italy received its world premiere recently. HorrorHound Weekend, which holds the HorrorHound Film Festival as part of the 3-day event and is the largest horror event in the US with over 25,000 people in attendance, hosted the film’s first public screening.

With a packed auditorium for the film, Brennan attended the event: “It was a huge achievement for our film to premiere at such a prestigious film festival. HorrorHound is one of the biggest horror magazines in the US, and its event is massive. We were blown away by the number of people in attendance.”

The film not only premiered at the event; it was also nominated in three award categories: Best Film, Best Actor for Stuart Brennan, as well as Best Director, the latter of which Stuart took home: “Awards act as milestones that your journey in this career is headed in the right direction. To take home Best Director for my professional directing debut was an incredible honor.”

Mark Paul Wake, who starred and produced alongside Stuart, was equally impressed by the win: “We all worked so hard on this film, and it’s not a Hollywood budget movie – it’s a real independent – so to see it win and get recognized makes all the hard work worth it.”

Plan Z has premiered during the jewel of horror film festivals in the US and came away with one of its top prizes, but it certainly isn’t stopping there. The film is also part of the Official Selection of the Canada International Film Festival in Vancouver later this month and has won the Royal Reel Best Foreign Film Award.

“A zombie movie needs to do something right to stand out in this marketplace, and so to start off our festival run with two awards back to back is incredible. Best Foreign Film is a big award to take home and really recognises the superb performances from the cast and the tireless dedication from all the crew. I’m so excited to share this movie with more people.”

Plan Z’s next stop is Hawaii, where it has just been accepted as an Official Selection at the Big Island Film Festival.