A horror experience becomes a night of genuine terror in Ruin Me, the feature debut of director Preston DeFrancis. A fun-looking trailer appeared this week for the film, which is geared up to begin its festival run this summer.

Ruin Me stars Marcienne Dwyer as Alexandra, who is dragged out into the woods by her boyfriend for a night of simulated horror known as the Slasher Sleepout, and soon realises that the fake screams and stage blood are actually far more real than advertised. 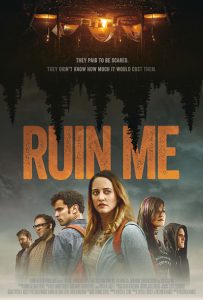 Welcome to Slasher Sleepout: The Ultimate Horror Movie Experience. It’s part camping trip, part haunted house, and part escape room, all rolled into one extreme 36-hour event. Six strangers are hooded, dropped in the middle of the woods, and must navigate increasingly strange and dangerous mysteries. Alexandra, the only participant who has never even seen a horror film, reluctantly tags along with her boyfriend. But one by one, the other campers meet grisly fates, and Alex must unravel the mystery of who’s responsible if she wants to have any hope of survival.

Ruin Me also stars Matt Dellapina, Chris Hill and Eva Hamilton. It has its world premiere in the UK on August 26th.