If you didn’t manage to catch Phoenix Forgotten when it took flight over cinemas earlier in the year, then you’ll be glad to know that the film will be hitting Digital HD on 18th July and DVD/Blu-ray on 1st August. 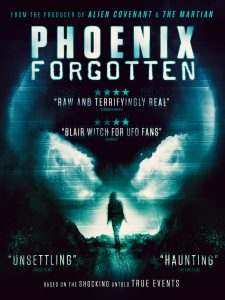 Forgotten is inspired by the strange true story from 1997, which saw a mysterious light phenomenon appear over the sky in Arizona with no explanation on two separate occasions. The first was later explained by the United Air Force who identified the lights as flares dropped by A-10 Warthog aircraft, but a v-shaped light formation that additionally appeared was never explained.

In the film, a group of students head to the infamous area of the incident and are overwhelmed with what they discover.  On the twentieth anniversary of their disappearance, we finally have the documented “real” evidence of their fatal investigation.

Directed by Justin Barber and produced by Ridley Scott, Phoenix Forgotten will be released on home video this summer. Extras include audio commentaries, Sophie’s Story and Phoenix Found.