Reggie Bannister, known to horror fans as the star of the Phantasm series of films, will not be making the Maryland leg of the Monster Mania Con at which he was scheduled to appear, but there’s a very good reason for his absence. As the con kicks off on September 30th, Bannister will be in LA, gearing up for the October release of Phantasm: Ravager, the fifth and final entry in the beloved franchise. 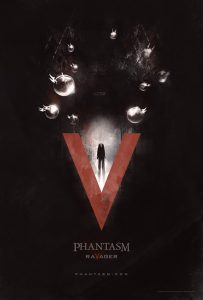 All has been quiet with regards to the film for a while now, so the confirmation (via EW) of an October 7th release date is big news. Bannister again returns as Reggie, who is set for his final confrontation with The Tall Man, played for the last time by Angus Scrimm, who sadly passed away back in January. Don Coscarelli, who directed all previous instalments, has handed the directorial reigns over to David Hartman, but remains onboard as writer and producer. All the key players from the 1979 original are returning, including A. Michael Baldwin, Kathy Lester and Bill Thornbury. Also appearing are Phantasm III’s Gloria Lynne Henry and Daniel Schweiger, who starred in Coscarelli’s Bubba Ho-Tep.

The first trailer to appear for Phantasm: Ravager was promptly taken down, but check this out: a five-minute ‘extended trailer’ which is, as Reggie himself says at the end, “epic”.

Phantasm: Ravager will be released in US cinemas and through Digital HD on October 7th.