Petition To Get Bloody Director’s Cut Of Carrie (2013) Released 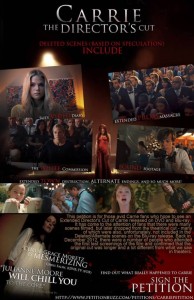 The film world can be a tough one for a fan, especially when some of the most violent and gory horror films are cut so much that we see a Disney version of the macabre. Often films are cut either for a quicker release date or to gain a lower rating so more people see the film, which is disappointing but how the industry works sometimes. Kimberly Peirce’s remake of the 1976 film Carrie, was slated for veering away from the original plot in Stephen King’s novel, but thanks to a dedicated film fan we know her version was much different to what was released.

Derek Johnson, the man behind it all, announced that Carrie (2013) was severely cut, as Peirce’s original cut was very violent and followed the novel much closer. The studio apparently cut around 40-45 minutes of footage that Peirce intended to use for a more powerful, gritty and gory story. That’s a lot of footage to be removed, and it included more prom carnage, visual scenes of Carrie using her powers, deeper character development and mass destruction of the entire town.

Although this seems like disappointing news, not all is lost, as the fans have taken fate into their own hands and created a petition to get the director’s cut released on DVD and Blu-Ray. We absolutely love the dedication of fans and think that Peirce’s bloody and destructive version would be an entertaining watch. Check out the trailer below, which contains some of the unseen scenes.