Last July, we brought you news that a sequel to the original RoboCop, directed by Paul Verhoeven and released in 1987, was in the works with Neill Blomkamp at the helm. To recap:

MGM retained Blomkamp (District 9, Chappie) to direct RoboCop Returns. It’s a shift for the filmmaker who, after famously failing to get Alien 5 off the ground, began producing short films under his own Oats Studios banner. 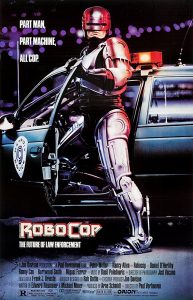 “The original definitely had a massive effect on me as a kid. I loved it then and it remains a classic at the end of 20th Century sci-fi catalog, with real meaning under the surface. Hopefully, that is something we can get closer to in making of a sequel. That is my goal here. What I connected to as a kid has evolved over time. At first, the consumerism, materialism and Reaganomics, that ’80s theme of America on steroids, came through most strongly. But as I’ve gotten older, the part that really resonated with me is identity and the search for identity. As long as the human component is there, a good story can work in any time period, it’s not locked into a specific place in history. What’s so cool about RoboCop is that like good Westerns, sci-fi films, and dramas, the human connection is really important to a story well told. What draws me now is someone searching for their lost identity, taken away at the hands of people who are benefiting from it, and seeing his memory jogged by events. That is most captivating. The other thing I am excited about is the chance to work again with Justin Rhodes. He has added elements that are pretty awesome, to a sequel that was set in the world of Verhoeven. This is a movie I would love to watch.”

While the project is still in the early days of pre-production, Blomkamp caused a minor stir on Twitter prompting speculation that the star of the original film will return for Returns. When a fan asked the filmmaker who he’d most like to see in the role of Officer Alex J. Murphy, Blomkamp didn’t mince words or offer a laundry list of potential candidates, simply responding: “Peter Weller”

Of course, who he’d like to see star in the film and who actually ends up in the metal suit remains to be seen. Weller is an accomplished thespian who recently turned 71, so while we don’t doubt he’s got the chops for RoboCop, we have to wonder if he’s got the stamina. It’s all just conjecture at this point.

We’ll keep our ears to the ground in order to bring you additional RoboCop Returns news as details emerge. Stay tuned!

Synopsis:
In a violent, near-apocalyptic Detroit, evil corporation Omni Consumer Products wins a contract from the city government to privatise the police force. To test their crime-eradicating cyborgs, the company leads street cop Alex Murphy (Peter Weller) into an armed confrontation with crime lord Boddicker (Kurtwood Smith) so they can use his body to support their untested RoboCop prototype. But when RoboCop learns of the company’s nefarious plans, he turns on his masters.