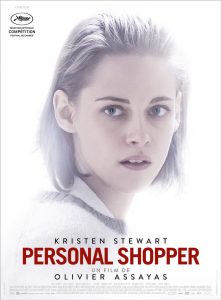 Maureen (Kristen Stewart), a medium and personal shopper living in Paris, is waiting for her deceased twin brother Lewis to give her a sign from the afterlife.

Personal Shopper begins intriguingly as Maureen enters the house of her deceased twin brother in the hopes of contacting him from the other side, the after life, heaven, hell, whatever you want to call it. It is immediately unsettling as she wanders around the dark and empty house, bringing forward feelings that are typically prevalent in gothic ghost stories with fog lingering in the distance and shadows dominating the walls in a design similar to German Expressionism. One would half expect Nosferatu to walk the stairs at any moment. It’s quite beautiful and if Personal Shopper had maintained this classic ghost story feel, it may have been a far more enjoyable horror experience. However, we can’t escape the clashing of the modern as many moments with Personal Shopper are concerned with Maureen’s mobile phone and the mysterious person on the other end of it.

Maureen’s confidence in walking around the creepy, creaking house is explained in the fact that she’s a medium, thus she hopes for supernatural events to occur. Nonetheless, the feeling that she should probably not be wandering around at night calling, “Lewis? Lewis?” as crashes ensue upstairs cannot be ignored. We’ve seen enough horror films to know that this is probably not going to be her dead brother and is probably something a little more insidious. The feeling that Maureen is making terrible decisions returns frequently throughout Personal Shopper and when she references the role of women in slasher films it will be difficult not to role your eyes. Admittedly, she’s not terribly stereotypical, but Personal Shopper could have turned the stereotypical characterisation of women on its head, by presenting to us a bold, fearless female. Instead, we’re given a smart-ish woman who is blinded by her desire to contact her brother, enters into dangerous circumstances because of this and even takes her top off a few times.

The events in Personal Shopper fast become tedious when Maureen enters into an agonisingly long text message conversation with an unknown number. I kid you not that a prolonged period of time is spent watching Maureen and Mr Unknown send back-and-forth messages that go round and round in circles from “who are you?” to “who do you want to be?” It’s a dire attempt for the film to take us on a twisting path of mystery. We don’t care who this person is and you’ll probably have a good idea of who it is, anyway. In the end, this particular chain of events is tied up with a lazy, messy bow, filed away and never fully explained. “What just happened?” You’ll be left wondering and that question will never be answered. Perhaps the film is a lesson in not knowing; it’s probably best that Maureen doesn’t know how her brother is doing in the next life and we shouldn’t know what’s going on in the life of the frustrating Personal Shopper; both the film and the character.

Maureen’s guilt is a prominent concern of Personal Shopper’s. She is unable to live her life because she is determined that she is going to be given a sign from Lewis and puts her life on metaphorical hold to wait. As she frequently says, “I’m waiting”. The sign she is actually waiting for is the sign that she should continue with her life and stop waiting. Her brushes with other spirits over her months of waiting for Lewis should push her to move on and let go. Alas, her guilt and desire to learn that her brother is at peace prevents her from going anywhere. As an exploration of the guilt and loneliness that comes hand-in-hand with the grief after someone’s passing, Personal Shopper’s comment is not unique, but Kristen Stewart’s powerful, evocative performance is just enough to carry the film’s familiar tale of losing someone you love. 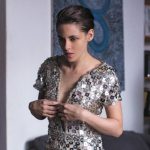 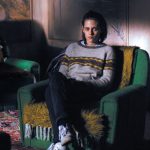 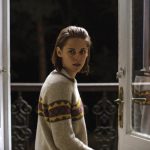 For a film that set such an early eerie tone, Personal Shopper soon abandons this and replaces it with an obvious air of mystery, but nothing truly spectacular. The film glides between two stories; one where she waits for her brother’s sign and the other that follows her life as a personal shopper for an affluent woman called Kyra. Her job as a shopper is as unsatisfying for Maureen as this film is for us. She picks various dresses and accessories from various designer stores; the monotony almost crushing her spirit, but she finds a break in the familiarity when she tries on the expensive clothes and shoes, despite it being forbidden. The mysterious person on the phone strives to take advantage of this as he (or she) tempts her into facing her fear of doing something she is not allowed to do. Again, this is another tedious chain of events that feels too separate from the film’s central story. Rather than add depth or perhaps a comment on modern society, celebrity and the pointlessness of expense, it just feels boring. There is no fear that Kyra is about to walk in, thus no tension is created and the scene feels like an excuse for Kristen to take her clothes off. The film’s lack of flow is its greatest flaw and the fades between scenes do nothing to persuade us of any continuity. The film opens many doors of potential, but the events on the other side are not full explored and many strands of the story are left feeling incomplete or have no benefit to the overall plot.

A film that is so preoccupied with death and what lurks after it needs to have more life. Personal Shopper lingers in a dire channel of tedium and mediocrity that prevents it from being enjoyable. A great performance from Kristen Stewart is not enough to save us from the film’s lack of flow and clunky movement between events. With a little more spark, this could have been something special.