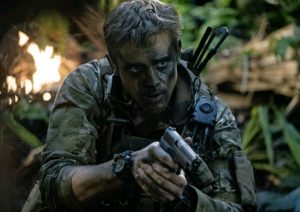 Take a trip back to the 19th century for LD Entertainment’s new horror flick Eight for Silver. The film will star Eden Lake’s Kelly Reilly (pictured right) alongside Boyd Holbrook (The Predator) and Alistair Petrie (Hellboy 2019).

Taking place in the French countryside, the story follows pathologist John McBride (Holbrook) as he tries to figure out whether a young boy was killed by a man or a beast. While staying in the home of wealthy local landowner Seamus Laurent (Petrie) and his wife Isabelle (Reilly), McBride discovers that the Laurent’s son is also missing. Can he solve the mystery, or will his own dark past get in the way?

Written and directed by Sean Ellis, Eight for Silver is being produced by Mickey Liddell and Pete Shilaimon.