Perez Hilton Most Likely to Die in New Trailer

A trailer has landed for upcoming slasher Most Likely To Die, which is set for a US release on Friday 13th May. 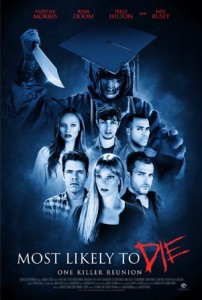 The film stars Glee’s Heather Morris and celebrity gossip-monger Perez Hilton, and has an official synopsis that suggests a by-the-numbers bodycount flick. Before you turn your nose up entirely though, you should know that Last Shift director Anthony DiBlasi is at the helm, and it’s hard not to think he’s got something a little extra up his bloodied sleeve.

Here’s that all-too-familiar synopsis:
Gaby has been dreading her high school reunion for months. It’s not that she doesn’t want to hang out with the old gang; as one of the top players on the Texas Hold ‘Em poker tour, she’s come a long way from her high school tag, “Most Likely To Play the Hand She’s Dealt.” But old grudges die hard and it seems one of her former friends isn’t content to let the past rest in peace. 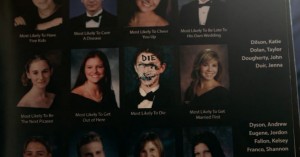 Gaby’s friends are picked off one by one, each murdered in a manner that pays gruesome homage to their yearbook superlatives. As the body count climbs, she is forced to admit that one of her friends is a psychotic killer. But who? Suspicion and mistrust pit friend against friend in a deadly race against time. Because at this reunion, it doesn’t matter what you were voted in high school. Everyone is Most Likely To… Die!

Check out the trailer below, and let’s wait and see.