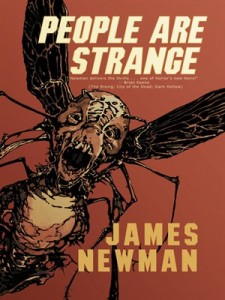 The first story is a bit of a mouthful,The Honest-To-God True Story of Earl P. and a Bug Called Abraham Lincoln, Earl woke and ‘stuck a hand down his boxers and gave his balls the ole’ first-thing-in-the-morning scratch as he watched the thing buzzing about above him’. Starts to become annoying, as all flies do but when it lands on his nipple and greets him with a good morning, it’s safe to say today is gonna be a different kind of day. Talking to a fly called Abe and visiting his landlord with a gun are on the menu for today and Earl has definitely not been taking his pills.

The Good, the Bad, and the Severely Maladjusted is a naughty little Cowboy and Indian story with a bit of a horrific twist, John Henry Mason prides himself in never having lost a fight and when he gets jumped by an Indian, there’s no way he’s getting scalped.

Your Cold Black Heart is a deliciously murderous piece of flash fiction and Dirty Black Summer is a tale of secrets going back to the Nazi death camps when young Billy explores his Grandmother’s attic. Secrets are dangerous for all concerned.

‘His emotions seemed to hover over him in a thick black cloud, contradicting one another, conflicting with the love he had felt for his late grandfather’.

Bless This Meal, O Lord is another piece of flash fiction that quickly explores how to deal with troublesome offspring. Suffer the Children is a diary style story of a woman who tells of her love for her husband Frank and of his obsession with donating his wages to sponsor a child from Ethiopia.

Always Digging is another piece of flash fiction about, well, digging and burying. And Keeping up with the Joneses is a bit of a precursor in a way, to the excellent story Animosity about normal people. People we see every day. People who are sometimes capable of terrible things.

A Town Called Hatred is a twisted place, a warped little town full of freaks, full of psychos and a great place to settle down, maybe start a family. Merrick is a serial killer with a body in the trunk, he drives past Hatred and the place beckons, calls to him and it’s a place he’ll fit right in.

Next up is Holy Rollers and a visit from two religious nutjobs is just what you need as you’re about to leave for work.

‘He cocked the hammer then, said softly but firmly, “Perhaps I should rephrase the question, Mr. Morris. You will invite my brother and I inside… and you will listen as we share the Word of God with you.”

Now this is the word of God like you’ve heard before, violently accompanied by a nipple sliced off and thoughts purely of ‘fuck me’ that was heavy.

People Are Strange is a new release on kindle and 94 pages of twisted visions from the dark mind of an individual who needs help, help to get more of this stuff down on paper and released to all the little bunnies like yours truly who love this kind of horror. Top marks for James Newman.