Pennywise the Dancing Clown is known to take many forms, but no one could have predicted his most recent incarnation: a board game baddie. 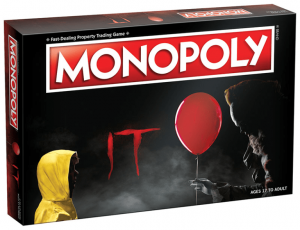 Game manufacturer USAopoly recently announced that it’s partnering with Warner Bros. Consumer Products to bring us three—yes, three—IT-themed games. This includes a twist on the classic murder mystery Clue, in which players will join The Losers’ Club in trying to decipher Pennywise’s plan while dodging his red balloons, and a Derry-based edition of property trading game Monopoly. The latter will feature a variety of tokens inspired by the film, which is based on the Stephen King novel of the same name, such as a paper boat, an inhaler, and a bicycle. No word yet on whether the sewers are a valuable piece of real estate or not, though you probably shouldn’t go down there.

Monopoly: IT will be available later this year. But if you can’t wait that long, never fear—Clue: IT is hitting stores in March. 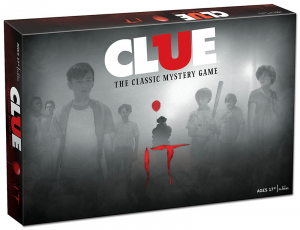 As if two new games weren’t enough, another IT tie-in game is also in the works—a signature cooperative dice and card game called IT: Evil Below. This game will see The Losers’ Club working together to drive Pennywise back into hibernation before he can munch on another local child. No release date has been announced yet, but more information is promised soon!