We’ve been teased with some behind-the-scenes clips circulating online, and that rather cool poster art, and now the official trailer for Season 3 of Showtime’s Penny Dreadful is here. The new season begins in the US on Sunday May 1st, at 10pm, and in the UK May 3rd, 9pm, on Sky Atlantic. 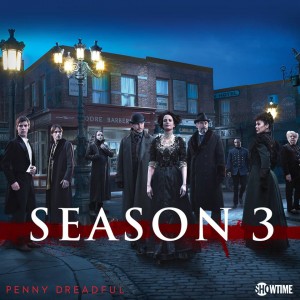 Other guest stars include Screen Actors Guild Award nominee Christian Camargo (“Dexter,” The Hurt Locker) as Dr. Alexander Sweet, a zoologist who strikes up an unlikely friendship with Vanessa; Sam Barnett (2012, Jupiter Ascending) as Dr. Seward’s mysterious young secretary; Jessica Barden (The Outcast, Far from the Madding Crowd) as Justine, a young acolyte to Lily (Billie Piper) and Dorian Gray (Reeve Carney); and Perdita Weeks (“The Tudors”) as Catriona Hartdegan, a scholar with expert knowledge of the supernatural.