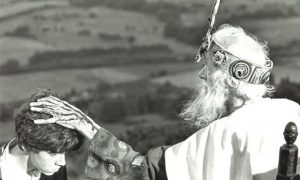 Penda’s Fen – originally shown on BBC1 in 1974 – is a feature-length television play, released commercially for the first time this year. Dealing with ideas of national identity and mythology, it is a heady, delirious mix of styles and genres, somewhere between a coming-of-age tale, a morality play and a horror film. Lovingly restored and remastered by the BFI, it’s easy to see why it’s been hailed by critics as one of the most original British films of all time, and the themes and issues explored are still as relevant today.

Stephen – the adolescent protagonist of the film – is the son of the local vicar. He longs to learn to defend his county but is bullied by his classmates, mainly due to his staunchly traditional upholding of establishment values. But Stephen – who initially describes the world as a ‘modern wilderness of amorality’ – soon finds his views becoming less and less clearly defined. He discovers he is adopted; he begins having homosexual fantasies; and before long, Stephen is plagued by visions of grinning grey-skinned demons. Though Stephen’s troubling pubescence is the initial cause for these changes, the film poses questions that go far beyond the transition from innocence to experience. By the time we meet the eponymous Penda, the message of the film is clear: that traditional ‘englishness’ is a fiction, a fiction that’s been violently imposed throughout an impossibly bloody history.

Director Alan Clarke, mostly known in the UK for his focus on social realism, takes certain liberties with Penda’s Fen, and the film is notably different from his other work, particularly in its lack of a conventional narrative structure. Instead, Penda’s Fen operates on its own internal logic, punctuated by vivid dreams and hallucinations that bleed into real life. At the start of the film, Stephen describes a nightmare in which he sees a demon on the steeple of the local church. As the story progresses, Stephen becomes less able to distinguish these dreams from reality, causing the film to become more surreal and symbolic. By the end of the film, Stephen gives up the effort of attempting to fit in altogether – which was never very convincing to begin with – and is transformed into his true self, a mix of “woman and man, light and darkness…mud and flame.” By sloughing off the ideas of his personal history and identity, Stephen is able to self-actualise in order to become a fully-functioning adult.

Though exhibiting a completely unique style of storytelling, there are many comparisons that can be drawn between Penda’s Fen and other horror films, particularly with the folk-horror movement of the 1960s and 70s. In one scene, Stephen stumbles on a village ritual in which smiling women have their hands cut off. In another, an ominous-looking angel appears behind him as he examines his reflection in a stream. Structurally, perhaps, the film has most in common with Jordan’s The Company of Wolves, with Freudian imagery used to reflect the changes inside Stephen on his journey towards adulthood.

But in places, Penda’s Fen is more ambitious than it is successful. The pace – which is illusive and hallucinatory – is decidedly patchy, particularly in the first half of the film. A plot thread about military experiments and disfigured teenagers is abandoned after a substantial build-up, and a scene in which Stephen meets the ghost of Edward Elgar seems a little self-indulgent. But Penda’s Fen is so much more than the sum of its parts, and the film is so dense and prophetic that these seem like minor missteps. Certain sequences, particularly Stephen’s first nightmarish wet dream, are some of the best I’ve ever seen on British television. The Biblical imagery – including stigmatic limbs, gilded angels, and a bottomless pit that appears inside a church – are also used to great effect. 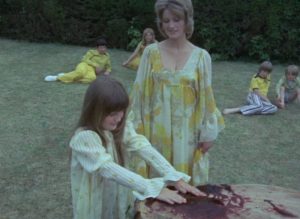 Penda’s Fen, despite its flaws, is quite unlike any film I’ve ever seen, weaving together disparate images to create a strong but elliptical whole. Though television can easily compete with film today, the fact that this was shown in 1974 is nothing short of extraordinary. For those who like their horror films dark, strange and inscrutable, this comes highly recommended.