Get Out has been considered for a Golden Globe; yay! But, it’s in the COMEDY section; what?! That’s right, Get Out is joining the Golden Globe race and is being considered in the comedy section, not the drama. “What’s funny about racism?” you ask. Well, nothing. Get Out is somewhat of a comedy and you’d be lying if you said it wasn’t funny, but the core of the film is a social DRAMA. Thus, shouldn’t it be considered for the DRAMA section?

Being nominated in the comedy section will actually increase the film’s chance of awards recognition. Check out this piece by the Independent. It correctly describes the possible Drama nominations as Call Me By Your Name, Dunkirk, Phantom Thread and others. That’s pretty tough competition. Sitting with Get Out in the comedy nominations could be The Disaster Artist, The Big Sick and I, Tonya; perhaps easier competition? Maybe this was smart thinking for Universal and we should be happy that a horror film (everyone knows it’s a horror film) is getting awards recognition at all. So, I’m pleased. 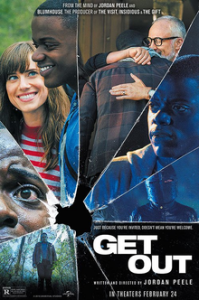 Get Out is one of the most profitable films of the year, so obviously talk is now moving to a possible sequel. However, director Jordan Peele is not keen to cash in on the film success and push a sequel if his heart’s not in it. He said to Deadline:

“I haven’t decided anything yet and I am allowing the creative part to bubble up, and not force it. I know if a follow-up is meant to happen, it will. I’m open to figuring out what it is. But I also don’t want to let down the original and its fans. I simply would not do something like that for the cash.”

Great decision. I’d love a follow-up, but only if it’s for good reason and it seems that Peele is going to allow a story to develop naturally and that’s the best thing for it.

The Golden Globe nominations will be announced on 11th December, so time will tell if Get Out gets its worthy awards recognition. The ceremony will take place on 8th January 2018.