Director Damien Leone has just shared the first official photo from the highly anticipated sequel to his 2016 film Terrifier. In it, we get our first look at Lauren LaVera as Sienna, the film’s female lead. 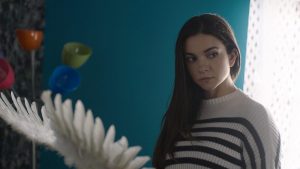 “We are using this quarantine to prep for our final days of principle [sic] photography (not many) and to edit the vast amount of footage we already have!” Leone wrote on Terrifier 2’s official Facebook page. “All I can say is you guys are in for a real treat with this film! More updates to come soon…maybe even a teaser.”

In Terrifier 2, Art the Clown is resurrected by a sinister entity and returns to Miles County, where he must hunt down and destroy a teenage girl and her younger brother on Halloween. David H. Thornton returns as the murderous clown. The cast also includes Felissa Rose (Sleepaway Camp).

The film was originally slated for an October release, but whether that’s still possible remains to be seen.