PEARL’S TRAILER HAS THE X FACTOR 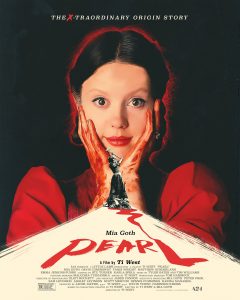 Ti West’s X was released just a few months ago, but we won’t have to wait long for the prequel! Pearl hits theatres on September 16th, 2022— and the trailer promises an “X-traordinary origin story!”

In Pearl: “Trapped on her family’s isolated farm, Pearl must tend to her ailing father under the bitter and overbearing watch of her devout mother. Lusting for a glamorous life like she’s seen in the movies, Pearl’s ambitions, temptations, and repressions all collide, in the stunning, technicolour-inspired origin story of X’s iconic villain.”

Mia Goth reprises the role of Pearl in the film, which she co-wrote with director Ti West. The cast also includes David Corenswet, Tandi Wright, Matthew Sunderland, and Emma Jenkins-Purro.

If you haven’t seen X yet, the movie followed a group of young filmmakers who set out to make an adult film at a farmhouse in rural Texas in 1979. But their reclusive, elderly hosts were not what they seemed, leading to violent confrontations with alligators, pitchforks, and other implements of murder. And from the look of Pearl’s trailer, these weapons were not new to her…

Ready for Pearl’s close-up? Check out the trailer below!