Further to his recent award-winning musical Patty which rendered a coarse commentary on identity, director and co-writer Patrick Kennelly tackles similarly compelling issues in his debut feature, Excess Flesh. Equal parts psycho thriller, splatter movie and sitcom, the film exposes modern society’s flaws in the form of a disturbing exegesis of female identity and body dysmorphic disorders and how they ultimately engender self-hatred and mental illness. 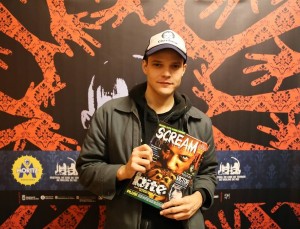 Meet Jill (Bethany Orr), a young woman harbouring a disturbingly unhealthy obsession with her sexy new roommate Jennifer (Mary Loveless). As Jill’s attempts to replicate Jennifer’s attractiveness and magnetism come to nothing failure lends itself to extreme jealousy and the most extreme measures imaginable.

SCREAM: Before helming and co-writing Excess Flesh you collaborated in all kinds of experimental theatre projects.

Patrick Kennelly: Oh yeah, I’ve done a lot of stuff. My background was in both the visual arts and theatre so I have been moving back and forth between different things over the past decade. Principally I’ve been working in the theatre world creating original works. I still co-run an experimental performing arts venue in Los Angeles so all this stuff was kind of leading me back into film – my first love – which I studied in school.

SCREAM: You have had the idea for Excess Flesh on the backburner for the last ten years or so I think.

PK: Well I had the initial thought and idea for it about ten years ago. I had written it down as a sort of one page treatment and had been doing some reading and research into some of the issues that are explored in the film. This idea that I’d had many years ago sort of floated back to the surface and the pieces just started falling into place.

SCREAM: Is it true that the premise is also inspired on a pop musical you devised mixed with the extreme terror of sitcoms and romcoms?

PK: Definitely. This to me started out as a horror movie that was in the mould of a romantic comedy or a sitcom using a lot of those tropes with the one location and two characters trapped in a closet. I think a lot of those elements started getting chipped away in the editing process of the movie and it became more of a straight psychological thriller. But that’s certainly where it all began because I never really thought that I was making a horror movie when I was doing this, it just kind of dropped into that world. I think there were, and there still are, a lot of darkly comedic elements to the story but I think it was deconstructing these different things and putting it into this tight and terrifying real headspace.

SCREAM: Where does this interest in mental health stem from?

PK: All the work that I’ve done in all the different mediums has been exploring questions of the mind, of identity in particular, of how identity is shaped by all these different factors: social, cultural, personal, psychological. I think all of that comes into Excess Flesh. It’s just been a continuing interest of mine over the years and it’s something I’m still pursuing.

SCREAM: Given the core subject matter did you bring in any mental health professionals to help whilst researching and writing the script?

PK: Well no but I have a lot of experience in these issues. In the end it’s a fantasy so I wasn’t trying to do a photorealistic dissection of these things but I think it was more about forming these issues into the narrative framework that was the movie. I think that’s just something that comes about in the writing process. If something doesn’t relate to a specific real thing that doesn’t matter to me so much because it’s more about the experience.

SCREAM: And was it a challenge to keep things captivating, especially as it’s mostly set in a single location with a couple of key characters?

PK: Definitely. That was sort of the impetus of actually making this film happen at that point it time. I was really eager to get a movie project off the ground. Excess Flesh actually kind of started out as a short film idea and, as we were starting to put it together, it grew much larger than that and I got excited about the idea of just having a whole feature film with two characters in one space. It allowed me to move from my theatrical world into this film world and having these two characters in one space is like the grammar theatre basically. And that came into the design too as it has a very stylised look to the production design and then it was all about putting a camera in there and just capturing the performances. To me this movie was all about the performances and less about the visuals and style. That stuff all just fell into place. To me it was really a pursuit of performance and these characters. 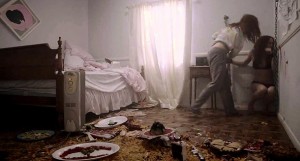 SCREAM: Did your cinematographer, Benjamin Conley, find it a challenge to create something more visually arresting for the audience?

PK: No. I think it sets up a lot of challenges for a cinematographer. It really kind of works their muscle. I think the hardest part is actually the physical part of it. The movie is 95% handheld and we were shooting with an Alexa which is like a 35 lb rig so having that on your shoulder for 12 hours a day is pretty aggressive. We did kind of trace a visual line in terms of how the movie would progress with the camera and with the lighting and the look of it from this very heightened thing to this really, really grungy and real place.

SCREAM: Coming to the characters, I think you immediately thought of Mary Loveless while you were writing because you went to school together and then Bethany Orr came along later. I imagine they really had to learn each other inside out for the film so how did you help them to get more comfortable with each other?

PK: Erm, I don’t think they ever did really get comfortable with each other [laughs] which was great actually, but I could be completely wrong about that. We did some rehearsals in the weeks leading up to it and it was just really a process of getting them comfortable physically with each other and kind of on the same page. But their styles are very, very different and the tension behind that was what made it really work.

SCREAM: Audience members walking out of a film in disgust is one thing but some of your crew members walked off set because they couldn’t handle what they were seeing. That must have been difficult but at the same time extremely satisfying.

PK: [laughs] It’s always satisfying. I mean, in all the productions I’ve done in theatre and this it’s always set off a lot of feelings in people. Yeah, what we were doing was creating these real circumstances on set and sometimes that was a little much for people to handle but it really fed into what the movie ended up being…

We’d like to thank Patrick for speaking with us at the Molins de Rei Horror Film Festival and we’ll leave you with a trailer for Excess Flesh.