Chilean director Patricio Valladares, whose films include Hidden in the Woods, Downhill and Nightworld, has shared the first couple of stills (plus an onset pic) from a sci-fi horror pilot he’s been working on. Entitled Embryo, the series is enticingly described as “…a deliriously twisted tale of alien insemination, cannibalism and love.”

Valladares wrote and co-created the series with regular collaborator Barry Keating, while Francisco Inostroza and Nightworld producer Loris Curci are on producing duties. 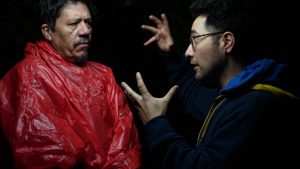 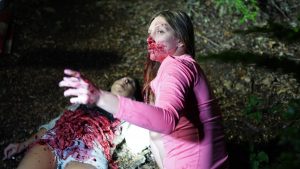 Synopsis:
“[Embryo] tells the story of Kevin and his girlfriend Evelyn, who, while camping out in the woods in the Chile countryside is abducted and impregnated by otherworldly beings. As the entity inside her begins to grow at a rapid rate, Evelyn discovers that the cravings she’s experiencing can only be satiated by the taste of human flesh and blood. When she attacks a doctor, Kevin decides not to hand her over to the authorities, but to go on the run and try to get to big city where they can find help to remove the thing that’s slowly taking over Evelyn’s body.”

Further details of Embryo – including when and how we’ll get to see it – remain elusive.