A Party Weekend Goes Awry in the Trailer for The Snare

A spooky trailer has arrived for the British horror The Snare from writer-director C. A. Cooper, who is making his directorial feature debut. The Snare follows a group of friends whose idyllic seafront holiday takes a turn for the worse when they are trapped in their apartment by a paranormal force. Don’t you just hate it when that happens? 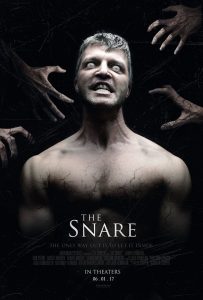 The trailer looks very impressive and showcases a lot of creative supernatural scares and the deterioration of the friends’ sanity as they spend an increasingly longer amount of time in the apartment. The Snare has been influenced by the likes of Sam Raimi’s Evil Dead and you can definitely sense this in the film’s atmosphere that is laced with dread and some of the bloody gore towards the end of the trailer.

We’re looking forward to seeing what British frights The Snare can bring and we hope you are, too. You will be able to watch the film when it is released on VOD in the New Year on 6th January 2017.