Parasites to Infect VOD this January

The indie festival-hit Parasites will be landing on VOD on 24th January, so you will be able to watch the feature on Amazon Instant, Google Play, Vudu, Xbox and iTunes in under a month. The film pits a group of friends against a gang of homeless derelicts, forcing them into a battle for survival where not all will come out triumphant. 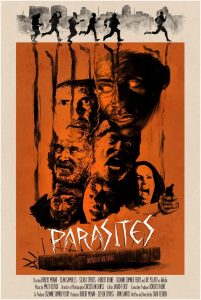 The industrial barbarianism of downtown Los Angeles is equal parts player and punisher in this survive-at-all-costs tale of a group of friends who get lost in the seedy streets where they encounter a crazed gang of homeless derelicts that captures and maims them one-by-one.  One lucky man escapes on foot, naked and unarmed, with a pack of depraved transients in pursuit, staying only seconds ahead. Clinging to sanity and reduced to helpless prey, with only instinct to guide him, can he survive this coliseum of horror?

The film has been praised since its world premiere at Fantasia International Film Festival, so we encourage you to add the film to your 2017 watch lists. If your New Year’s resolution is to watch more independent horror cinema, then this is one that you should definitely be checking out. It promises a sadistic, violent ride, but has also been commended for its thought-provoking subject matter, so it looks like it has the perfect balance between straight-up horror and meaningful drama.

Parasites comes from director Chad Ferrin (Someone’s Knocking on the Door, Horse) and will be released on VOD in HD on 24th January 2017.