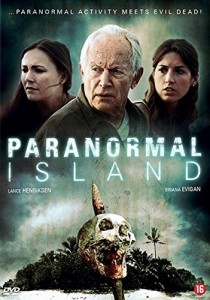 Synopsis:
After taking on a summer job to bartend at a bar in the middle of a lake, three college students think they are in for the summer of their lives. However things are much different after hours, they miss the last boat off the island and soon find themselves hunted by the ghost of a killer caretaker.

PARANORMAL ISLAND is the directorial debut of actor turned director Marty Murray that was previously called The Caretaker. Starring Sorority Row’s Briana Evigan it pains me to say that this film is neither scary nor is it enjoyable. Taking a fair bit of time to set up the story without much character development, Paranormal Island is a supernatural slasher film set on a unique location but lacking scares which is never a good thing.

The plot of the film is relatively simple and follows three friends who decide to take a job at a bar situated in the middle of Barny Lake where the only access off and on the island is by boat. After their shift the three friends ignore the warnings of their colleagues and stay on the island after hours for a few drinks. This obvious silly mistake results in them disappearing one by one thanks to the ghost of the previous owner who once committed suicide after loosing the bar in a game of poker.

The cinematography from Dilip Isaac is uninspired and knowing that this is the directorial debut of Murray, it is clear that he has a lot of room to grow. The film looks great on screen  but the overall quality is anything but. The film feels very lackluster and two thirds in had become incredibly boring to watch. The special effects used in this film are just awful. They consists of CGI ghost faces and a few fast paced tracking shots reminiscent of Sam Raimi’s Evil Dead crash-cam which is used to chase the cast around the island.

Speaking of which, the majority of cast are bitterly disappointing. Considering this is a film about three friends there was no chemistry between Ben Elliot, Ben Marten and Sarah Karges on-screen. Their performances are forced and are easily forgettable. Genre legend Lance Henrickson appears as Carl, the local voice of reason advising the group to leave the island promptly. Thankfully, there is a saving grace and it came from Briana Evigan’s performance. A great genre actress, Evigan stands shoulders above the rest of the cast. Her performance, although based on a very disappointing script, was actually not that bad and somehow made the film watchable.

Overall, as you can tell I got no enjoyment from this film. There are no scares. There are no satisfying death scenes. Instead we are left with a silly chase film that lacks any real sense of menace or tension. With this in mind I advise you to approach this film with caution as this is an island I won’t see myself revisiting anytime soon.