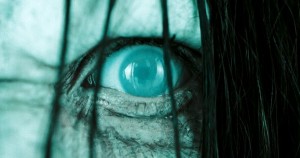 More than ten years since the release of The Ring 2 (the American one), Paramount are dredging a new instalment from the well, entitled Rings, it was announced a while back. The sequel will emerge in the UK and US on October 28th, and it seems that more encounters with that cursed videotape are set to follow.

Introducing the film’s trailer at CinemaCon, Paramount Vice Chairman Rob Moore revealed that the studio is planning to revive the franchise with annual Halloween releases, the coveted and potentially lucrative spot dominated for years by the Saw films, and usurped by Paranormal Activity.

With the trailer as yet unavailable online, MovieWeb have handily broken it down for us:
“The trailer was set entirely on an airplane. A passenger is talking to a woman next to him when the plane hits a spot of turbulence. He tells the story of meeting a woman, part of a group called “The Sevens”. From this woman, our narrator received the video tape that ‘The Ring’ fans will well remember. The next day, he received a call that he would die seven days later. That call was six days, 23 hours and 55 minutes ago. Suddenly the turbulence worsens, the cockpit flight instruments flicker to static and some mysterious black liquid bubbles up out of the airplane lavatories. We cut to Samara’s well, both on the cockpit instruments and the airplane monitors throughout the cabin. Samara crawls out of the video and towards the narrating passenger and we are cut quickly to the title treatment.”

Rings plays as a direct sequel to The Ring 2, with original plans to make it part-prequel allegedly dropped when the studio was unable to secure original star Naomi Watts. 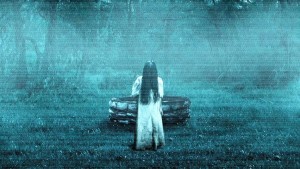 Rings stars (unexpectedly, it must be said) The Big Bang Theory’s Johnny Galecki, alongside Scream 4’s Aimee Teegarden, Alex Roe (The 5th Wave), Laura Wiggins (Dance of the Dead) and Bonnie Morgan (The Devil Inside, Fear Clinic) as Samara. F. Javier Gutiérrez (Before the Fall) directs.

With so much time having passed since the last instalment, Paramount will no doubt be looking to introduce younger viewers to the story, although they may have to add in a scene to explain for the little nippers what a VHS tape is.