Paradise is Temporary in the Trailer for Here Alone

I do love slowly escalating suspense in a trailer and the new trailer for Here Alone has just that. Just as I was beginning to think of how the trailer seemed a little devoid of zombies, violence and, well, the good stuff, it proved me wrong. A slow-burn beginning that introduces us to the characters is soon replaced with full-blown, bloody action and it’s great. Talk about a trailer that bursts with a false sense of security! Much like the characters that journey in the film, the trailer proves that the quietness can only last so long, because paradise is temporary in this post-apocalyptic and zombie-dominated world.

Synopsis:
In Here Alone a young woman struggles to survive on her own in the wake of a mysterious epidemic that has decimated society and forced her deep into the unforgiving wilderness, until she encounters two other survivors who make her confront her past while putting all of their lives at risk. 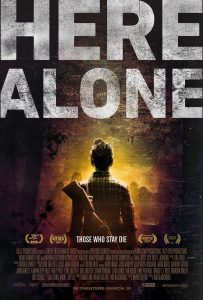 Here Alone looks to be a thoughtful and brutal trip with the undead and if the reviews are to be believed, it’s a breathtaking, dread-ridden horror-thriller and that sounds great. We’re excited to see what fresh life director Rod Blackhurst (Amanda Knox) and writer David Ebeltoft (You Were Once Called Queen City, North) can bring to the always overflowing zombie genre and if what we’ve seen so far is anything to go by, this could be something special.

Here Alone will be receiving a limited release in the USA on 31st March 2017 and stars Shane West, Lucy Walters, Gina Piersanti and Adam David Thompson.