Pandorum Director Getting Weird with The Fox Mission

Pandorum director Christian Alvart has found funding for his latest genre flick, and it sounds like he’s going for something pretty unique, and really weird. 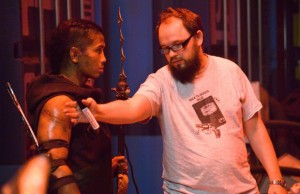 Alvart was snapped up by Hollywood following his breakout 2005 film Antibodies, helming two American horror films in 2009. One was the nice-looking but underwhelming Pandorum – a deep space sci-fi horror – and the other the moody and effective child abuse chiller Case 39. Neither film made much of an impact at the box-office however, and Alvart returned to his native Germany where he would shoot, among others, action thriller Banklady and crime comedy Half Brothers.

Alvart’s production company, Syrreal Entertainment have been signing a series of deals to produce various genre films, the latest of which is with Chinese production company Jiabo Culture. The film in question is a $20 million fantasy adventure called The Fox Mission, which is said to be steeped in traditional Chinese mythology. Little has been revealed about the film, besides this brief but brilliantly odd synopsis:
A nine-tailed blue fox is sent from the Spirit Mountain to the human world to kill the evil emperor.

Really though, what else do you need?

Alvart is scheduled to begin shooting this Autumn, in both Beijing and Berlin. Syrreal is hoping the film will mark a continuing partnership with Jiabo Culture.