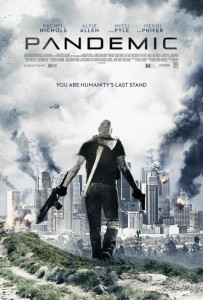 Synopsis:
Set in a near future where a virus has overtaken the planet, Pandemic is the story of Lauren, a doctor who has been sent into the infected area of Los Angeles to lead a team to hunt for and rescue uninfected survivors.

Pandemic is ninety-one minutes of panic fueled action from John Suits, the director of such films as The Scribbler. Starring Rachel Nichols, Missi Pyle, Alfie Allen and Mekhi Phifer, Pandemic is a strange affliction that scoops the audience up with its fast-pace and puts them in the place of the lead character. What happens next is a series of action pieces that aims to create heart-racing tension.

I am firmly on the fence when it comes to Pandemic. As a no-brainer sci-fi horror it plays to all expectations but it falters rather clumsily along the way. The use of the first-person perspective was at times incredibly effective and puts the viewer right into the thick of the action playing out like a really intense computer game but the dodgy camera angles, frantic camera movements and out of focus shots really pulled me out of the film because I couldn’t see what was going on.

This is not helped by the cast in any way. Above their screechy and two dimensional characters, pretty much everyone in this film phones in their performances. Not a single person stands out which is surprising considering who is actually in this film. Rachel Nichols gave a satisfying performance in P2 but in comparison her performance here is basic at best. Torn between her job and finding her daughter, Nichols’ performance as Lauren is hindered by a simple script and a shoehorned attempt to inject some wafer thin character development.

Joining her is Alfie Allen from TV’s Games of Thrones, he plays an ex-con Wheeler who is assigned as the driver of the team. His performance relies on his character constantly pointing out that he doesn’t need anyone and will do what is best to keep himself safe. This grows thin very quickly. Rounding up the cast is Mekhi Phifer and Missi Pyle. Both are near unrecognisable in the roles. Phifer plays hard-arsed soldier with a bad attitude and Pyle plays the caring and sweet counterpart. That said both characters have their pivotal scenes but lack of investment in these characters reduces any impact these scenes may have.

Strictly speaking, there is certainly an audience for this film. I believe that the first-person perspective aspect will anchor well with gamers and it will be the cinematic injection of fun that they are looking for. But at the end of the day, the film suffers from a bit of self sabotage. I could tell that the filmmakers behind the camera would have rehearsed their choreographed action pieces but its execution on the big screen sadly lacks impact. The first-person perspective obscures way too much to fully appreciate what is going on and what we are shown is overshadowed by far too many predictable jump scares and an underwhelming climax.