With production scheduled to begin this month on the remake of Joel Schumacher’s underrated sci-fi chiller Flatliners, a rather surprising addition to the cast has emerged. Although the deal is reportedly not quite finalised, Kiefer Sutherland – who starred in the 1990 original – has committed to a role in the new vision. 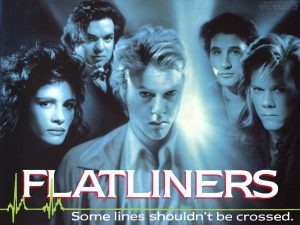 Flatliners 1990 starred Sutherland, Julia Roberts, Kevin Bacon, William Baldwin and Oliver Platt as a group of young medical students who decide to explore what lies beyond by stopping each others’ hearts for increasing periods of time. As they begin to stay ‘dead’ for longer, visions of childhood terrors come back, turning into threats far more dangerous than mere memories.

Flatliners will be released sometime in 2017.