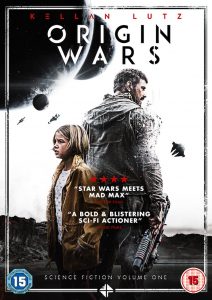 Synopsis:
Set in the future, Origin Wars follows Lt Kane Sommerville (Daniel MacPherrson) as he races against time to save his child from an impending global crisis. His journey takes him to Sy Lombrok (Kellan Lutz) who is running for different, but equally deadly reasons, but agrees to get Kane to his daughter.

Origin Wars suffers for all its nods and similarities to Star Wars, Alien, Mad Max, Blade Runner and the rest. The story feels like The Best of Sci-fi, where every familiar event is combined in an, admittedly, action-packed series of events, but one that is hindered by predictability. It’s an impressive concept that doesn’t fully work, with Origin Wars feeling like a hollow shell without the feel of truth that is needed to convince its audiences of the deeper societal concerns that it wears on its sleeve.

For credibility, Origin Wars needs the intensity and energy that should come hand-in-hand with a film that is set against a ticking clock. Sy has less than a day to make it to the planet Osiris before a twisted General Lynex (Rachel Griffiths) threatens to blow up everything in her wake. Lynex is your typical futuristic female in command; her ice-white hair a reflection of her stone cold personality, where she needs not to think twice before destroying innocent people to save her own skin. It’s that familiar sci-fi trope that pits the strength of the family against the strength of a large corporation and we bet you’ll guess who comes out on top. Rather than ensuring it hits these predictable beats, it would have worked in this story’s favour to carve out something a little bit different to work alongside the mostly impressive world building. 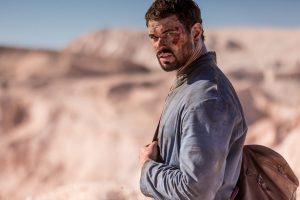 There is a lack of energy and emotion that makes it difficult to get behind Kane as easily as it was to ride with Furiosa and Max. It may be set in Australia, but Origin Wars cannot compete with George Miller’s heart-racing rush across the desert. With a little more punch and pinch of riskier action, Origin Wars may have been a more thrilling. Alas, what we’re delivered is basic enjoyment that will please those less familiar with science-fiction, but will do very little to those that know the difference between Star Wars and Star Trek.

The film has big, but frequently explored, ideas about monsters lurking within the human psyche, playing god and messing with nature for military purposes, but is without the power and quite simply, the budget, to fully bring these thoughts to life. Angry CGI monsters and fast-cut editing are used to mimic the thrills of big budget studio features, but only succeed in bringing the film’s budgetary restrains to the surface. Don’t get me wrong, the design of the monsters is probably the best thing about the film, but it’s a shame we don’t get a really good look at them until the end.

Despite not having a Disney budget, Origin Wars tries its best to adopt a similar, sleek and striking world for its story to unravel in. Undoubtedly, the scenes that showcase the mostly computer generated locations are occasionally beautiful, allowing Origin Wars to soar high and impress with its ambition. However, you’ll be frequently brought back to earth with a bump with the film’s clunky dialogue and lack of narrative surprise. Both Kellan Lutz and Daniel Macpherson lack the spark needed to bring this film to life, but I’m unsure they could have done much better without a complete re-write of the cheesy and, at times, melodramatic script. 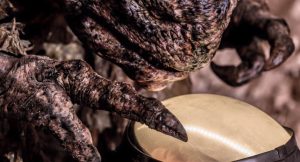