Open Your Eyes to this Westworld Poster

HBO’s sci-fi-thriller series is gearing up for its October release and to ensure we’ve got our eye on it, a new poster has been released. Check it out below. It reminds us of the poster for Mike Cahill’s romantic sci-fi I Origins, but we’re assuming that may be as far as the comparisons go. 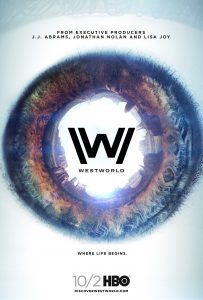 The Westworld series will be based on the 1973 film that stars Michael Crichton and follows a Western-themed amusement park that allows visitors to kill artificial beings. When speaking in an interview with EW last year, the show’s writer – and brother of Christopher Nolan – Jonathan Nolan described Westworld as “A place where you can be whoever the fuck you want to be and there are no consequences. No rules, no limitations.” It’s an exciting, but terrifying prospect that goes wrong when a cowboy robot goes awry.