The Onion take a Hilarious Look at von Trier’s Antichrist

To celebrate Halloween, satirical news network The Onion has been casting their eye over a selection of iconic horror films. In a highlight among the bunch, their head film critic Peter K. Rosenthal takes a look at Lars von Trier’s 2009 arthouse nightmare Antichrist in this hilarious video.

In von Trier’s film, Willem Dafoe and Charlotte Gainsbourg play a grieving couple who retreat to a woodland cabin following the death of their young son. As Dafoe’s therapist attempts to heal his wife’s grief, their lust and the nature around them manifest themselves in dark and disturbing ways. 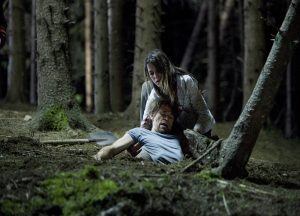 In The Onion’s video, Rosenthal tells how the film perfectly realises the five stages of grief experienced by those who have lost a loved one. The first stage – Denial – is followed, he says, by the second – “grotesque woodland isolation.”

Admirably maintaining a serious and informative manner, Rosenthal goes on to explain how “Grievers venture to a remote location in a foreboding primeval hellscape to reflect on their feelings,” as part of a process that “anyone who’s ever mourned the death of a family member will instantly recognise.”

It’s a brilliantly dry and completely ridiculous analysis of von Trier’s stony-faced look at grief and marital horror, in which “chaos reigns!”