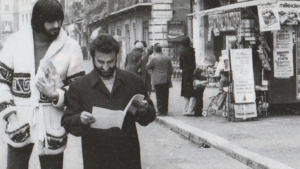 OMEGA RISING offers viewers an insight into the life of notorious Italian filmmaker Aristide Massaccesi, better known as Joe D’Amato to an army of horror fans across the globe, as told by those who knew him best. Featuring interviews with cult icons George Eastman, Michele Soavi, Michael Shannon and Claudio Fragasso, amongst others, OMEGA RISING tells the story of a man whose graphic films continue to shock millions, but also that of a man who was admired and loved by everyone lucky enough to know him.

Best to known to most horror fans as the man behind such infamous ‘Video Nasty’ fare as BEYOND THE DARKNESS (1979), ANTHROPOPHAGOUS (1980) and ABSURD (1981), Aristide Massaccesi (1936-1999) directed nearly 200 movies in the period between 1970 and the time of his death, equalled perhaps only by Jess Franco in terms of sheer output. As with that maverick, while the quality of this work was, shall we say ‘variable’ (others would argue ‘rubbish’), any genre fan has to admire that burning, irresistible drive to just keep making movies, no matter what. Under his nom de guerre of Joe D’Amato, he remains as much a cult figure in Eurocult circles as the generally more respected likes of Fulci and Argento. 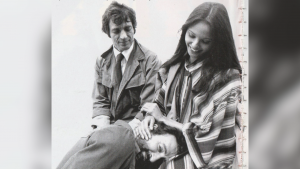 A shorter, 68 minute version of this co-production between 441 Films and 88 Films, directed by Eugenio Ercolani and Giuliano Emanuele, turned up as an extra on the latter’s recent recent BEYOND THE DARKNESS Blu, but under consideration here is the full 96 minute version that was officially selected at last year’s Sitges Festival. Aimed at those already familiar with the man’s work, OMEGA RISING eschews the straight chronological route in favour of building up a vivid picture through a selection of intercut interviews with some of the key figures he worked with, along with some choice clips from the films discussed.

Completely unopposed to such a status is Manlio ‘Mark Shannon’ Cersosimo, always more than happy to oblige in that department, who tells of how D’Amato and his crew completely forgot to shoot the climactic scene of the infamous BLACK SEX (1980) – wherein Shannon’s character graphically castrates himself – while on location in the Caribbean, and had to film pick-up back home on an Italian beach. Hardly the kind of scene you’d forget about, one would think! Both Eastman and Shannon also share some much, much ruder anecdotes that you can discover for yourself. 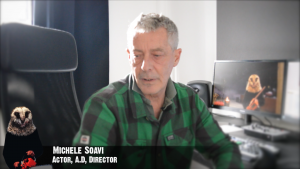 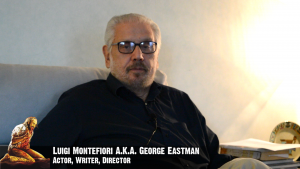 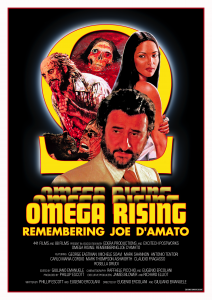 While none of the assorted talking heads here sugarcoat their experiences with the director, or make any great claims to his being any sort of ‘genius’ – Eastman flatly states that D’Amato “hadn’t the foggiest idea how to direct an actor” – the cumulative effect is a feeling of real warmth towards the man and his memory, and a sense that a true filmmaking family developed under his auspices and influence. Between the clips of fellatio-castrations, fetus-munching, corpses dissolving in acid, and heads stuck into ovens, a very touching story of love, friendship, and mutual respect emerges. But aside from this, the film more generally represents a valuable insight into the crazy bygone age of low-budget Italian genre filmmaking, from those who were right there at the sharp end. It goes without saying that a deep interest in this area is required to enjoy what’s on offer here – an hour and a half of subtitled interviews on the subject certainly isn’t for everyone – but if you’re on board for some advanced Eurocult studies you’ll find it absolutely fascinating. Look out for OMEGA RISING at a festival near you.