Synopsis:
When a babysitter’s mutilated body is discovered in the vacation town of Dead River, police immediately suspect a nomadic family of cannibals. At the same time, a vacationing family takes refuge in an isolated cabin, unaware of what’s been lurking in the woods nearby. It’s up to a retired cop to help track down the tribe before they strike again. 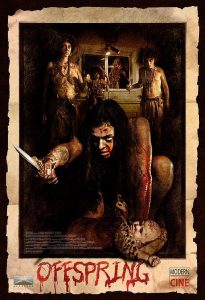 Every so often, a film comes along that reeks of wasted potential. That’s certainly the case with director Andrew Van Den Houten’s Offspring, released in 2008. It’s the perfect example of having the ingredients for the perfect recipe, but not knowing how to utilise them properly. One can only wonder what might have been the outcome with the proper direction and focus. It certainly has its fair share of merits and moments of clarity, but unfortunately gets bogged down by its noticeable flaws.

Written for the screen by author Jack Ketchum, it’s a downgrade in quality from some of the other adaptations of his work. Red, The Girl Next Door, and Offspring’s sequel, The Woman, were provocative, shocking, and left an impression on anyone that saw them. The source material for this particular film is Ketchum’s book that serves as the second instalment in his self-crafted mythology about a nomadic cannibal family that began with Off Season.

Much like some of his other works, one of the dominant themes includes the confrontation between civilisation and savagery. A tribe of nomadic cannibals spreading through the woods like some form of incurable disease is more than enough to draw you in. All of the elements for a great story are certainly present, and the whole narrative will keep you focused for its entire duration. However, there are more than a few problems that are painfully obvious, most notably the films outward appearance, and its inability to utilise an effective storytelling method.

If there’s one glaring flaw that’s obvious from the first act onward—it’s the cannibals themselves. They’re not entirely convincing, with the exception of actress Pollyanna McIntosh, who portrays her same role later in The Woman. They don’t come close to resembling a feral group living that live in the wilderness, and fail to project any outward appearance of intimidation. Their communication amongst themselves also detracts from this crucial element. Their language is subtitled for the audience. The terror from villains such as these comes down to the fact that there is no reasoning with them. They’re a mindless killing machine that plows through their unsuspecting victims, without remorse or provocation—they’re the hunter, always in search of the next prey. Needless to say, it’s something that’s impossible to overlook. One factor that does work in their favour is seeing them in their natural setting. The cave in which they dwell has a self-contained atmosphere about it, complete with natural lighting that helps establish mood.

The overall tone shifts around a great amount, and at times appears to be all over the place. It’s starts out as a mystery, shifts to family drama, home invasion, and even cat and mouse game, as our hunters become the hunted. The home invasion sequence comes completely out of nowhere without much build up, and lacks any noticeable amount of suspense. It does hit fast, and you get the feeling of terror from the victims, but it’s your average by-the-numbers scenario that we’ve seen time and time again. There’s definitely a lot more that could have been done with it, and feels like a lost chance to capitalise on emotion.

As far as the rest of the cast goes, they’re unable to bring forth the human element that’s needed for a film of this nature. In other adaptations of Ketchum’s works, this has been one the essential parts that’s integral to the storyline. The human drama gets the viewer more involved with the story, which makes everything else hit that much harder. It’s just one more crucial puzzle piece conspicuous by its absence. 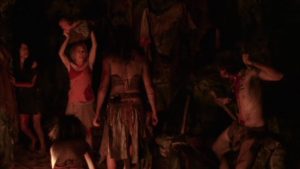 When all is said and done, Offspring is a mediocre effort. Beneath its flaws and moments of tedium, there’s still a decent story. It might not be the most memorable film you‘ll watch, and you might not even give it a second viewing. It grasped for the stars, but the lofty goals it attempts to accomplish are just barely out of reach.