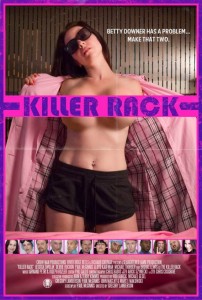 Hold on to your jugs as the official trailer for Gregory Lamberson’s (Slime City, Dry Bones) Killer Rack has just had somewhat of a nip slip, and we’ve got more than we bargained for in this hilariously horrifying film about a pair of killer breasts.

This b-movie has more than just the one b for budget, as there’s boobs, blood, barrells of belly laughs and more boobs. Jessica Zwolak (Dry Bones), Debbie Rochon (Tromeo and Juliet), Paul McGinnis (Dry Bones) and Michael Thurber (The Sins of Dracula) star in the titillating carnage.

Killer Rack may look like a trashy comedy horror about the greatness of massive boobs, but it actually aims to do the opposite by making a light hearted joke about sexist culture. It is ultimately about “female empowerment, and a warning against changing your physical appearance to please others.” according to Lamberson’s original KickStarter campaign.

There is an IndieGoGo (https://www.indiegogo.com/projects/killer-rack-ultimate-indiegogo) page currently supporting them to take the film to festivals and get it released on DVD. They’ve already hit their target, but any help will only better the film and you’ll get a handful of perks too.

Synopsis:
Betty is suffering from low self-esteem so she decides to get breast enhancement surgery, unaware that her surgeon worships H.P. Lovecraft’s elder gods, and the surgery is part of a diabolical plot to rule the world.