Official First Look at the Women of the New TERMINATOR

20th Century Fox has released this new image from the as yet untitled ‘sequel’ to the original Terminator. 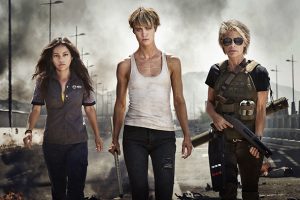 Fans of the franchise immediately went into overdrive with wild speculation as to how these characters fit into the Terminator universe, does that mean the previous sequels are going to be ‘disregarded’, and will this movie be any good? While conjecture is rife across webpages and chat groups across the internet, the fact is that we will simply have to wait and see more before we can begin to form an qualified opinion (but where’s the fun in that).

Fingers crossed a trailer is on it’s way very soon.