Magnet Releasing are going on a marketing offensive with ultraviolent supernatural cop flick Officer Downe, but while last week saw the poster and first trailer revealed, this is what we were really after; the full-blooded, riotously brutal red band trailer! 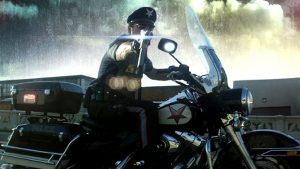 Packed with squibs, quips and outlandish villains, this trailer invites Robocop comparisons, with an officer killed on duty and resurrected as an invincible super cop. Sons of Anarchy’s Kim Coates stars as the titular lawman, who is resurrected each time he dies. Also starring are Sam Witwer (The Mist), Lauren Luna Vélez (Dexter), Meadow Williams (Can’t Come Out to Play) and Tyler Ross (V/H/S 2).

The film is directed by M. Shawn Crahan (better known as Slipknot’s oil-drum-pounding Clown), and is adapted from the 2010 graphic novel of the same name by Chris Burnham and Joe Casey.

Officer Downe takes you into a hyper-real Los Angeles for the story of a savage LA policeman who is repeatedly resurrected and returned to active duty via dark science technology. When a rookie officer named Gable is recruited as back up, he discovers there’s much more to the titular super-cop than a mindless law enforcement drone warring against a twisted rouges gallery of over-the-top super-villains.

Officer Downe will be laying down the law when the film hits VOD on November 18th through Magnolia’s Magnet Releasing.