Darren Lynn Bousman is starting to build a reputation as one of horror’s more interesting and unpredictable directors. Since directing Saws II – IV, he has brought us Repo! The Genetic Opera, 2010’s Mother’s Day remake and last year’s flawed but fascinating Abattoir. His latest, St. Agatha, looks to be an intriguing foray into period horror and maternal nightmare, and now has a distribution deal sealed out of the AFM.

As reported by Deadline, Octane Entertainment has just acquired worldwide sales rights to the psychological horror, which is currently in post-production. 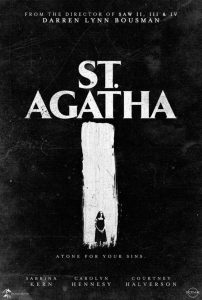 Synopsis:
Set in the 1950’s in small-town Georgia, the film centres on a pregnant con woman named Agatha who is on the run and seeks refuge in a convent. What first starts out as the perfect place to have a child turns into a dark layer where silence is forced, ghastly secrets are masked, and every bit of will power Agatha has is tested as she learns the sick and twisted truth of the convent and the odd people that lurk inside its halls.