With New York City Comic Con almost upon us, comic companies have been upping up on their pre-game with exclusive announcements and special releases. In the spirit of fan-fare, both Image and Dark Horse Comics have announced new horror titles coming out next year with both being written by two of the biggest names in comics today.

First up is Image’s Gideon Falls, a psychological horror penned by Jeff Lemire and illustrated by Andrea Sorrentino. Having previously worked together on Old Man Logan and Green Arrow, the dastardly duo once again teams up to bring a tale that teeters the line of reality and madness. The story will focus on split leads, a recluse man who searches for answers in his city’s trash and faithless priest in a rural town, who become entangled in each other’s lives with the appearance of rumoured The Black Barn. They each explore its legend, questioning the value of their lives, while following a ghostly building rumoured to bring madness and destruction wherever it appears. 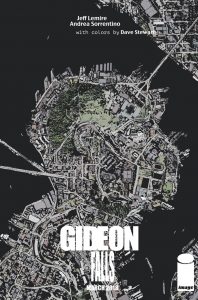 Due out March 2018, the work is being billed as a “rural mystery and urban horror collide in this character driven meditation on obsession, mental illness and faith.” The series is planned to be on-going instead of a set-issue work.

Dark Horse, never one to be outdone, have announced they will be adding to their growing Neil Gaiman library with the work “A Study in Emerald.” Originally a short story written for an HP Lovecraft/Cthulhu crossover collection titled A Shadow Over Baker Street, the tale will be adapted into graphic novel form via artist Rafael Albuquerque and writer Rafael Scavone. It will feature a detective who very much resembles Sherlock Holmes as he stalks the streets of London in an attempt to solve a murder. Little does he know that he is looking for something much different from his average nighttime killer, something much more cosmic. 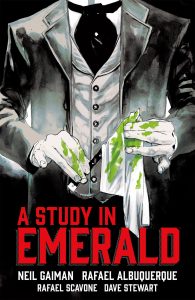 The graphic novel is not the first time the short story has been adapted into another form of entertainment, the first being a board game of the same name. In the game, the players are already held in the grips of the towering Old Ones and are now forced to choose loyalties in the chaotic streets below. The game even features actual anarchists in Victorian England.

The graphic novel, much like the rest of the Dark Horse Gaiman library, will be in a hardcover release and run at about 80 pages. Look for it everywhere on June 20th.