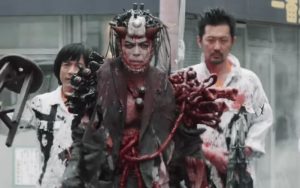 Director Yudai Yamaguchi played a big part in kicking off the modern J-Splatter trend with his 2005 cyberpunk gore opus Meatball Machine. A spiritual descendent of 1989 classic Tetsuo, The Iron Man, the film is a full-throttle sensory assault, with shockingly out-there practical effects by Yoshihiro Nishimura. An instrumental figure in J-Splatter, the FX maestro worked on The Machine Girl, Tokyo Gore Police, Dead Sushi and many more, as well as directing Tokyo Gore Police and Vampire Girl vs. Frankenstein Girl among others. 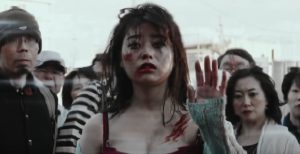 As well as providing special effects and makeup for the 2005 original, Nishimura directed 2007 short Meatball spinoff Reject of Death, making him an ideal choice to direct the sequel proper. While the trailer gives little away in terms of plot, Nishimura’s effects work is on full display. The director reunites with a number of regular collaborators in the film, including veteran actor Yoji Tanaka (Ju-On, Exte), Eihi Shiina (Audition, Tokyo Gore Police), and Takumi Saito (13 Assassins, Vampire Girl vs. Frankenstein Girl).

Click play on the trailer, and prepare to be weirded out and knocked back in your seat by Nishimura’s outlandish gore and bizarre character designs. Keep an eye out for Meatball Machine Kodoku in 2017, when it will hopefully appear on some festival bills.