We’ve seen innumerable deliberately outlandish monster shark films in recent years, but one that looks to have more bite than a thousand soulless CGI SyFy shitfests is the frankly batshit crazy-looking House Shark.

After a successful festival run and a trailer that has racked up well over half a million views, indie production house/distributor SRS will release the film, but only after an Indiegogo campaign to give the film an expanded home release, which offers backers early release copies to be shipped in April. 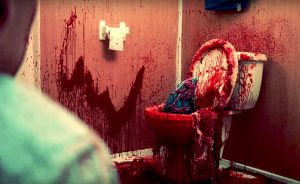 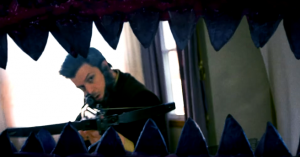 SRS president Ron Bonk directed the film, which looks like a damn tasty morsel. Read the following synopsis and tell me you’re not on board.

“You’re gonna need a bigger house! When Frank (Trey Harrison) finds his happy home under attack by a dangerous but largely unknown breed of shark, he’s enlists the aid of the world’s only “House Shark” Expert, Zachary (Michael Merchant), and a grizzled former real estate agent, Abraham (Wes Reid), to embark on a desperate quest to destroy the beast and claim back his life. It’s JAWS in a house!” 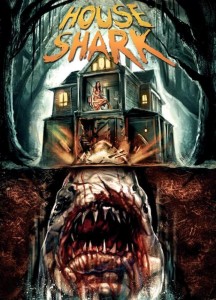 The current crowdfunding campaign aims to expand the DVD & Blu-ray to a Special Edition 2-disc set with more special features, plus alternate cover art and stickers included. If invasive sharks, bargain-bin splatter and hilariously fake beards are your thing (and I have to assume they are), you can donate here.