The Nun Goes After Another Farmiga 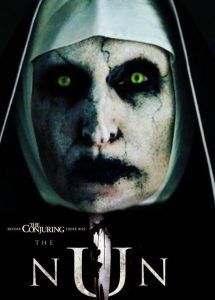 With production underway on Corin Hardy’s The Conjuring spinoff The Nun, casting news is now beginning to trickle in. We learnt recently that Demián Bichir (The Hateful Eight, Alien: Covenant) had become the first cast member to sign up, and he has now been joined by Taissa Farmiga (pictured above). And no, that last name is not just a coincidence; Taissa is the younger sister of Vera Farmiga, who was menaced by the titular spook in last year’s The Conjuring 2.

21 years Vera’s junior, Taissa Farmiga has appeared in The Final Girls, American Horror Story and Ti West’s In a Valley of Violence. She will star in the film as a young nun (although whether or not that means THE Nun remains unknown), with Bichir as Father Burke, a priest dispatched by Rome to investigate another nun’s mysterious death. Further plot details are being kept tightly under wraps for the moment.

The Nun was scripted by The Conjuring/Conjuring 2 director James Wan and Gary Dauberman, who wrote The Conjuring spinoff Annabelle and its upcoming sequel, not to mention Andy Muschietti’s hotly-anticipated adaptation of Stephen King’s It. New Line will release The Nun on Friday, July 13th, 2018. Meanwhile, David F. Sandberg’s Annabelle: Creation will hit screens on August 11th, 2017.