Nothing is Normal in the Poster for Tilt 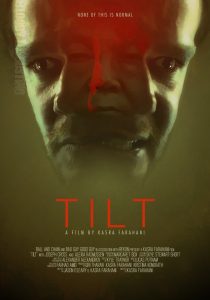 A new poster has been unveiled for the psychological thriller Tilt, which follows a young couple who quickly come to realise that one of them is hiding a sinister secret. Venturing out into the night, Joseph is suffering from an identity crisis – probably having cold feet about the baby he and his girlfriend (wife?) are about to have – choosing to search for danger on the streets of LA.

Is Tilt’s story a metaphor for commitment issues? I think so.

Check out the striking poster below which shows the two sides of Joseph’s personality. He’s quite the Jekyll and Hyde.

Tilt comes from director Kasra Farahani (The Good Neighbor), with a script written by himself and Jason O’Leary. The cast features Jessy Hodges, Joseph Cross, Billy Khoury, Kyle Koromaldi and C. S. Lee. The film will be screening at the upcoming Fantasia Film Festival.

Check out the trailer below; it shows Joseph falling over the edge into madness as he struggles to come to terms with the dangerous events he’s found himself caught up in.