I Am Not a Serial Killer Gets New UK Poster 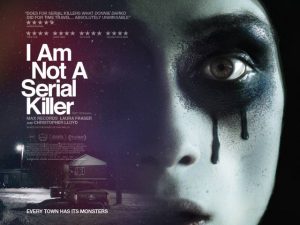 With chilly psychological thriller I Am Not a Serial Killer heading to the UK in December, this moody new poster has emerged.

Based on the 2009 book of the same name by Dan Wells (part 1 of his John Wayne Cleaver trilogy), the snowbound film stars Where the Wild Things Are’s Max Records as a sociopathic teenager who finds himself hunting the serial killer who plagues his small, Midwest town, whilst also suppressing his own violent urges. Christopher Lloyd co-stars as the tellingly-named recluse Crowley, along with Breaking Bad’s Laura Fraser.

Sixteen-year old John Cleaver (Records) is dangerous, and he knows it. He’s obsessed with serial killers, but really doesn’t want to become one. Terrible impulses constantly tempt him, so for his own sake, and the safety of those around, he lives by rigid rules to keep himself “good” and “normal”. However, when a real monster shows up in his town he has to let his dark side out in order to stop it – but without his rules to keep him in check, he might be more dangerous than the monster he’s trying to kill.

I Am Not a Serial Killer premiered at South By Southwest earlier this year, and became a much-talked-about entry at the recent London Film Festival, with comparisons to Donnie Darko being liberally thrown around. It will arrive in selected UK cinemas and on VOD platforms on 9th December.