I AM NOT A SERIAL KILLER: Film Review

Synopsis:
John Cleaver is a clinically diagnosed sociopath struggling to keep his murderous intentions at bay. When a serial killer plagues his small Midwestern town, his obsession with the murders threaten to push him over the edge. 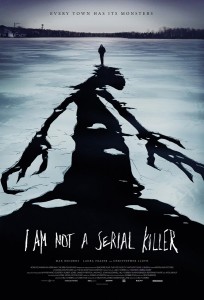 I Am Not a Serial Killer breaks down the psychology of serial killing in this gripping and surprising tale about a teen clinically diagnosed with psychopathic tendencies and a straight-up killer who isn’t your typical psychopath. Aside from the killing, that is. Held together by a striking performance from the young Max Records as John Cleaver – even his name rings killer bells – and the ever impressive Christopher Lloyd, this is one serial killer thriller that should be at the top of your watch lists.

Set in a snowy Midwestern town which makes the perfect location for this icy story of killers and the killed, I Am Not a Serial Killer is shot in 16mm to give the film a gritty and raw edge. It is a terrific touch from director Billy O’Brien that heightens the film’s authenticity and its concern with creating a unique, but realistic story that is grounded in reality. It also conjures a striking resemblance to films like The Texas Chainsaw Massacre, but again, choosing to twist what audiences may expect by trading the harsh orange and yellow cinematography of Hooper’s feature, with glowing whites and greys, to become an almost polar opposite setting to Leatherface’s sun-drenched landscape.

The description of serial killers as likely to harm animals and be pyromaniacs emphasises the story’s desire to tear apart the idea of a serial killer, so that it can re-invent and subvert this psychology to create its own, surprisingly humane killer. Again, as humane as a serial killer can be, that is. Deep within I Am Not a Serial Killer’s frozen heart, there is a twisted interest in love, friendship and families that are entwined together, yet separately, with each character dealing with different conflicts of the heart. There is a mother desperate for a relationship with her son, but struggling to do so because she is unsure how to communicate. Then we have an elderly couple, struggling with age and the hindrances that come with. Everyone is fighting their own psychological battle, but soon they are forced to fight a physical one when a serial killer strikes. The journey we are taken on is a surprising one, filled with twists and turns and an infectious blend of humour and darkness that crafts a horror story that is equally as funny as it horrifying. 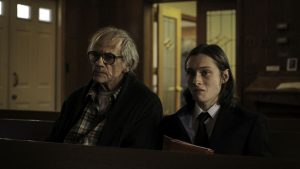 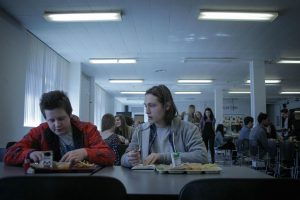 John’s mother and aunt own a mortuary, which becomes a safe haven for John as the only place he can safely express his fascination with murder and death. The film is an effortless and complex character study of a boy’s struggles through adolescence. Where regular teens may be concerned with losing their virginity; John is more concerned with not losing a grip on his sanity, A touching and comedic narrative strand follows John’s friendship with Brooke (Lucy Lawton), who is blissfully unaware of the obvious attraction she has to him. His mind is more caught-up in not killing the bullies that make his high school life hell, than making out with a cute girl at the Halloween dance. These intricate tos-and-fros between humour and horror make I Am Not a Serial Killer a refreshing and creative character-driven story that ticks all the horror boxes, but equally succeeds in crafting an intelligent and enticing thriller feature.

I Am Not a Serial Killer is an excellent and unpredictable thriller that boasts brilliant performances and an appropriately dark story. It is refreshing to see a film with a keen and obvious amount of nostalgia, but still be able to craft its own unique identity that is all the more impressive for its nods to 70s and 80s gritty cinema.