Not For Sale to Miners: Peelers Hits DVD in July 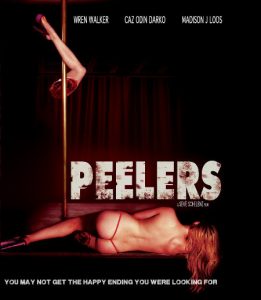 Spilling onto DVD and Blu-ray in July is Peelers, the latest nightmare from Skew director Sevé Schelenz.

Directed by Schelenz from a script by Lisa DeVita, this “gooey, gory instant classic” stars Wren Walker, Madison J. Loos (The Tooth Fairy) and the quite brilliantly named Caz Odin Darko (Evil Exhumed). Read on for the official synopsis:
Former baseball player Blue Jean Douglas is closing down her small-town strip club and leaving for good. But her plans are not so easily attained when a group of coal miners show up and with them a deadly contaminant. What starts out as a last hurrah for the infamous strip club, turns into a blood bath. With time running out, Blue Jean must step up to the plate to try and put a stop to the spread of destruction before it’s too late and she loses everything she holds dear.

The DVD comes loaded with extras including deleted scenes, commentaries and behind-the-scenes featurettes, with further content on the Blu. Both will hit shelves on July 4th, from Uncork’d Entertainment. In the meantime, why not check out this trailer.