With all eyes on the high-tech mocap of the upcoming Friday the 13th: The Game, another slasher video game looks to be treading closer to Jason’s 1989 NES outing. The game is a 16-bit retro horror RPG entitled Camp Sunshine, and was developed by the three-man team at Fossil Games.

No doubt a lot more fun than 1989’s Friday the 13th game (remembered as one of the worst NES games ever), Camp Sunshine is about a boy called Jez, whose trip to summer camp takes a turn for the worst when crazed killer Isaac Illerman comes back from the dead, dons a mascot costume starts hacking his way through the campers.

This footage couldn’t be more spot-on in terms of evoking the feel of early-90s RPGs, and with the added swearing and eviscerated corpses, it has that little extra something that Zelda was always missing. 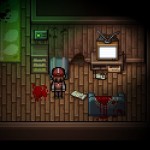 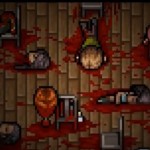 Camp Sunshine materialised thanks to a successful crowdfunding campaign on Indiegogo through which Fossil Games raised nearly $1,200 in April. The developers say “we firmly believe we are creating a game that will make you pine for the good old days of gaming & horror!”

Camp Sunshine will be available on PC, Mac and mobile.