Norman Goes Psycho in the Trailer for Bates Motel S5

Bates Motel is drawing to an expected close with its fifth and final season this February and now we have a trailer to share with you. As has been teased in the description for this last season, Norman Bates is gearing up to go full Psycho to bring the show to its necessary and potentially perfect end.

Check out the trailer below, which guides us round the Bates Motel before one final, sinister shot that shows Norman’s mother, well, looking a bit chilly to say the least.

Picking up two years after the death of Norman’s mother, played by Vera Farmiga, the synopsis for Bates Motel Season 5 is as follows: 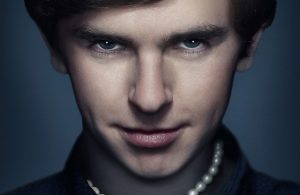 Norman (Freddie Highmore) is living a double life; publicly a happy and well-adjusted member of the White Pine Bay community, Norman struggles at home, where his violent blackouts are increasing as “Mother” threatens to take him over completely. Meanwhile, Dylan (Max Thieriot) and Emma (Olivia Cooke), now with lives of their own, soon find themselves drawn back into Norman’s insanity, while a vengeful Romero (Nestor Carbonell) hungers for a chance to destroy his stepson.

Season 5 will also introduce the famous character of Marion Crane, originally played by Janet Leigh, but Psycho fans are warned that she may not meet the demise you will be expecting. Played by pop singer Rihanna, Marion will feature in the series, but the show’s creators don’t want us thinking they’re just going to copy the 1960 original film from Alfred Hitchcock, so prepare yourselves for some surprises.