When Stephen King’s novel Cujo made it to the big screen, it made a huge impact. Man’s best friend had betrayed us, and even more so because it was the lovable St. Bernard breed, renowned for helping people. I’m sure that after watching Cujo, people were taking a second look at dogs and wondering. The terror was all the more real because the rabid bite that turned Cujo into a beast wasn’t supernatural. I’m a huge fan of books that take you behind the scenes of horror movies. Lee Gambin brings us an incredibly in-depth look at the movie with Nope, Nothing Wrong Here. That title is a phrase that makes multiple appearances throughout the movie.

The author takes us through the film scene by scene, examining the action and the wider cultural references around it, interspersed with interviews. The comprehensive nature of the book covers the soundtrack, the cinematography, and no stone is left unturned.

Besides the author’s examination of the film and discussion of the making there are some great images. Some of the gems include pages from Stephen King’s original screenplay draft, deleted scene stills, lobby cards, sheet music, and lots of behind the scene photographs. There are interviews with much of the team behind the movie. Gambin talks to director Lewis Teague, 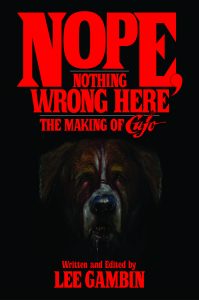 composer Charles Bernstein, makeup artists, and camera assistants. There are also extensive interviews with the cast including Dee Wallace, Danny Pintauro, and Daniel Hugh Kelly. The interviews all throughout the book provide fascinating insight into the film, the characters, and what they were trying to do with the film. I especially enjoyed hearing about directions that the plot was going to go in but didn’t for the final production. The part I was most looking forward to was the discussion of the pivotal siege scene where Cujo stalks a mother and son trapped in their broken down car.

At over 500 pages, you may be worried that such in-depth examination of one single movie might be boring. It didn’t launch a franchise, and there is no wider world built around it. However, that is absolutely not the case. It’s a fascinating read. You really get to know all the actors and crew. If behind the scenes books interest you, or if you have any fondness for Cujo, then you will love this book.